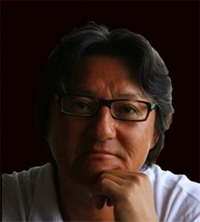 Born in Wakayama on July 10, 1957. After graduating from Kanagawa University, he entered the Photography Division of Asahi Graph.

He became a freelance golf photographer in 1987.

He moved his activity base to overseas in 1987 and has covered 100 major tournaments, including the Masters, the US Open, the Open and the US PGA Championship.

Miyamoto depicts the true nature of humans in his photos by skillfully taking advantage of light and shadow instead of just following golf games.

He also photographs golf courses throughout the world. He has taken golf-themed photos for illustrative purposes and works with international golf magazines. He has served as a licensed photographer for the Pebble Beach Golf Links, Riviera Country Club and Abiko Golf Club since 2002, 2010 and 2013, respectively.

He has published photo collections, including “It’s a Beautiful Golf Course” and “Dream of Riviera,” and co-published the “Fairway of Dreams” series (Shogakukan Bunko) with writer Shizuka Ijuin.